The scourge of gun violence has reached epidemic proportions across the United States. After every mass shooting, people point to gun violence in Chicago as an example of how gun regulation doesn’t work. After all, they say, Chicago’s gun laws are among the strictest in the country, yet it has one of the highest murder rates in the US. What this argument fails to address are the underlying causes of murder in Chicago’s inner city – poverty, joblessness, mass incarceration and institutionalized racism. Additionally, the threat of sending federal troops into Chicago, an idea that is constantly being floated by national politicians who have absolutely no willingness to confront the reality on the ground, looms over the ghetto like a dark and ominous cloud. 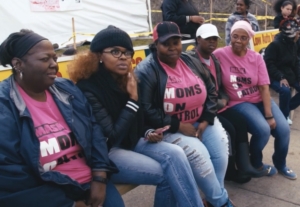 This film will show how Tamar Manasseh and MASK are proving on a daily basis that something can be done to reduce gun violence when there is the will to do so. This message needs to get to a wider audience, quickly. Tamar has become a well- known figure in Chicago and she is poised to become a national figure – in the past several months, The New York Times has published four opinion pieces that she wrote. They Ain’t Ready For Me will play a big role in establishing her as an important voice not only for the black community, but for an increasingly multi- ethnic America as well.

The film will show how Tamar addresses the challenges facing both the black and Jewish worlds. The story exists within the context of the larger issues that are playing out in today’s America – increasing racial tensions, rising inequality levels and a growing sense of atomization and alienation. Within the Jewish world, Tamar is looked at as an outsider, someone whose identity is constantly questioned even as her approach to fighting gun violence is lauded. The paradox is that while she credits her Judaism as the source of her activism and she claims many Jews as supporters, she is kept at arm’s length by the mainstream (white) Jewish community.

The film will also shine a light on how grassroots activists can step into the breach when local, state and national institutions fail to address the basic needs of their constituents. Another vital dimension of the film is its focus on a strong woman who is emerging as a community leader. In the current social and political climate where women are increasingly making their voices heard and where the struggle for women’s rights has become a unifying force, Tamar serves as a role model and inspiration for us all.